What is This Place?

The Time I Walked Into A Secret Society 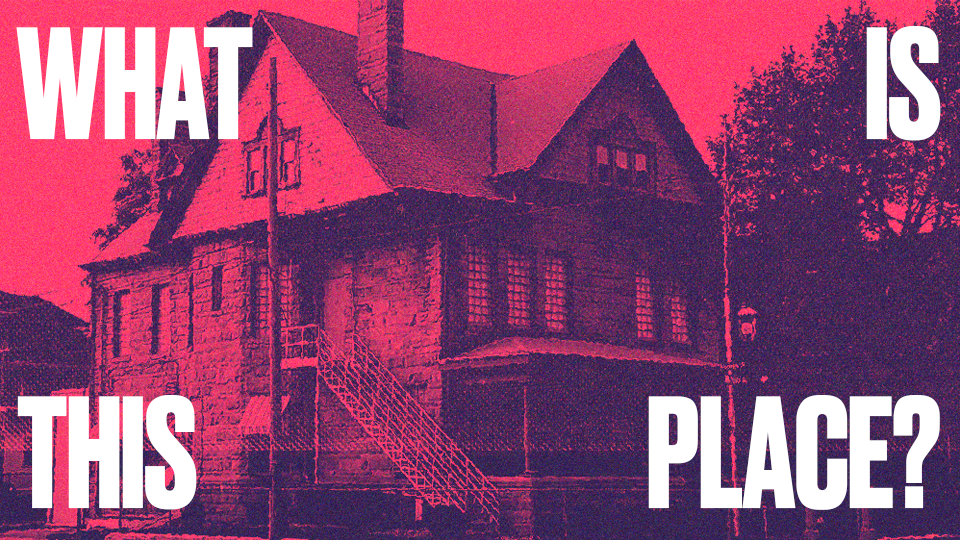 I thought I was just going to meet this alum for a socially distanced coffee chat. Instead, he told me to meet him at this address at 4:30 p.m. in Hamilton, Ohio.

“Text me when you’re on the way,” he messaged me.

I googled it. It didn’t seem like it was a place for coffee, or even a restaurant. It looked like an old house that kids would avoid on Halloween.

“At Hamilton Library? Or the Monkey Mutual Aid Society?” I asked.

“Monkeys,” he said. “Directly across the st from the library.”

I switched from Google Maps to actual search results. The Facebook page came up, and a private Facebook group for a couple hundred people. The latest post on the public page was a woman asking if this was the right person to talk to about getting COVID-19 vaccines for her and her husband.

This was early February.

Whatever this place was, the Monkey Mutual Aid Society had closed for a bit during the first COVID-19 lockdowns. It seemed to be a big deal that it closed, since it only did that for major holidays — Christmas, Thanksgiving and New Year’s Eve. It’s listed as a 501C3 nonprofit organization and the second oldest charity in Hamilton, Ohio.

But what do they actually do?

A 2012 Dayton Daily News story also came up about minority groups at a city council meeting calling to stall the reaccreditation of the Hamilton police force. In the story, local Black leader, Richard Cox, said that he opposed reaccreditation for Hamilton police because, among other reasons, police, firefighters and city council members were involved in Monkey Mutual Aid Society, which Cox had called a racist secret society.

My Google escapade was about to make me ten minutes late to this meeting.

But now I was worried I was going to get kidnapped by a racist secret society.

I grabbed a ring to wear on my pointer finger so my punches would hurt even more if I needed to throw one. I shared my phone location with my roommates indefinitely and told them where I was going.

I tried to calm myself down in the car. I had to be relaxed if I really was walking into a situation where I might have to defend myself.

The alum I was meeting was running late too. I parked in the library parking lot and waited outside this house. There was an official sign that said members only.

The alum walked up with two older gentlemen flanking him.

This was my first time meeting this person outside of a Zoom call. Later, I would find out that this was just the alum’s dad and his dad’s friend, but at this point, I had so much adrenaline rushing in my ears I could barely hear him making introductions.

“It’s just a place where people meet. It’s a good time, I promise,” he said.

So I followed them in.

My heartbeat pounded in my ears, but in a way that felt like it wasn’t my own – like all these alarms were going off.

It was a dive bar. It was full of old white men and paneled with yellow wood. It was loud, pandemonious even — until they all turned to look at us when we walked in.

I forgot I was wearing rainbow earrings until right at that moment, and I quickly covered them with my hair.

“You want something to drink?” he asked me.

When I spoke, guys at the bar stopped talking and turned to look at me. Like they were trying to figure out if I belonged there.

It was a regular networking chat. At a dive bar. Full of older people sitting at plastic tables and folding chairs.

Ten minutes in, I still had alarm bells going off.

“Are women allowed in here?” I asked.

Guys at the bar turned around to look at me again.

“Yeah. I think so,” he said, and then leaned over to his dad.

“Women are allowed in the club, right?”

His dad paused. The guys turned back to face the bar.

The alum seemed surprised, while his dad continued.

The alum explained that this surprised him. He’d grown up here and remembered his grandma had hung out here too. He pointed to a corner where he used to play with toy cars when there was still a toy box there.

It was familiar to him. Normal.

“Here, let me show you something in the back.”

He stood up and motioned for me to follow him. To the back.

My hand curled into a fist at my side.

He stopped before we reached the hallway at a showcase with a taxidermy monkey inside.

This wasn’t even the weirdest thing about this place. I relaxed. I even laughed. I turned around and there was a white woman working at the wings station that just opened up.

Over fries and wings, I asked him again about this place.

But he also said it was an important place for locals.

“It’s just a place where people meet to do business.”

We changed the subject, and I left a bit later. I made it back to my apartment. I laughed at myself from over an hour ago, when I wondered if I was walking into a self-defense situation.

I googled this place again.

Cox said he had a fallout with SCLC.

SCLC’s president in the story said that Cox hadn’t been a member of the national board since 2013.

“I kinda had a riff with the national board,” Cox said.

In 2016, the Dayton chapter that claimed to be part of the SCLC was not related to the national organization at all. The Dayton chapter had its tax-exempt status revoked in 2012 due to a fraud scandal.

Cox was most recently quoted in a 2020 WHIO article as both a bishop and a protest chairperson for Clergy Community Coalition, a group that was condemning systemic racism and healthcare inequality.

But I was calling him about why he called the Monkey Mutual Aid Society “racist.” I could guess why he did, and I couldn’t blame Cox for his assumptions.

“Black people are often referred to as monkeys,” Cox said.

He can’t remember where he came across the Monkey Mutual Aid Society, but he didn’t personally know any members. He said the group structure of this organization seemed suspicious.

“It sounds like a secret society aimed at racial division.”

All I had seen was a bunch of white guys eating cheap wings. Officially it’s a fraternal organization that’s over 120 years old, though it’s been tax-exempt since 2006.

Maybe it was nothing. Maybe it was just an adult version of a college fraternity, but with a built-in bar.

Sixty percent of its income reported on its 2018 taxes came from net inventory sales, which I can only guess is from members buying wings and beer.

A Feb. 2020 post on the Oxford Talk Facebook page by a new Oxford resident asked about “Monkeyland,” which he said looked like a campground when he and his wife passed by.

One member responded easily. He said the Monkey Mutual Aid Society was founded in 1901 by a group of men who pooled their money to buy a keg of beer and saved the extra money. More and more members joined to pool their money.

Now, they have a thousand members.

“Each year as members pass or drop out an equal number of new members are added, so the total remains 1,000,” the member said.

Their next (private) event on their Facebook page is the “29th annual Stan Warner drawdown.”

I had to google what “drawdown” means: “a reduction in the size or presence of a military force.”

Tickets are $20. Herbert “Stan” Warner died in 2019, and his obituary lists his membership in the Monkey Mutual Aid Society and a Fairfield, Ohio, chapter of a similar society, Fairfield Eagles #3680.

“Yes they are very private, but guests are always welcome by a member of good standing,” the member posting on Facebook said. “No, there’s nothing freaky going on. It’s basically a bunch of blue collar guys. To join you must know a member and be asked.”

He also added that the society was a nonprofit, which it is.

“Most of our donations go to the developmentally disabled in the form of events at Monkeyland during the summer.”

I couldn’t find any evidence that it was doing any actual charity work. But this member seemed more open than what I’d previously found out about the Monkey Mutual Aid Society. I decided to call the number listed on the group’s Facebook page. Maybe this club wasn’t super secret, after all.

The guy on the other end of the line answered, and I could hear the roar of the bar in the background.

“Hi. Um, I’m on your Facebook page right now and I’m, um, just kind of curious about what this place is.”

“What’s the private club do?”

He immediately put me on hold. For ten seconds, the line crackled.

Then it was silent.

Letter from the Editor