How Trans People Stake Claim on Their Identities 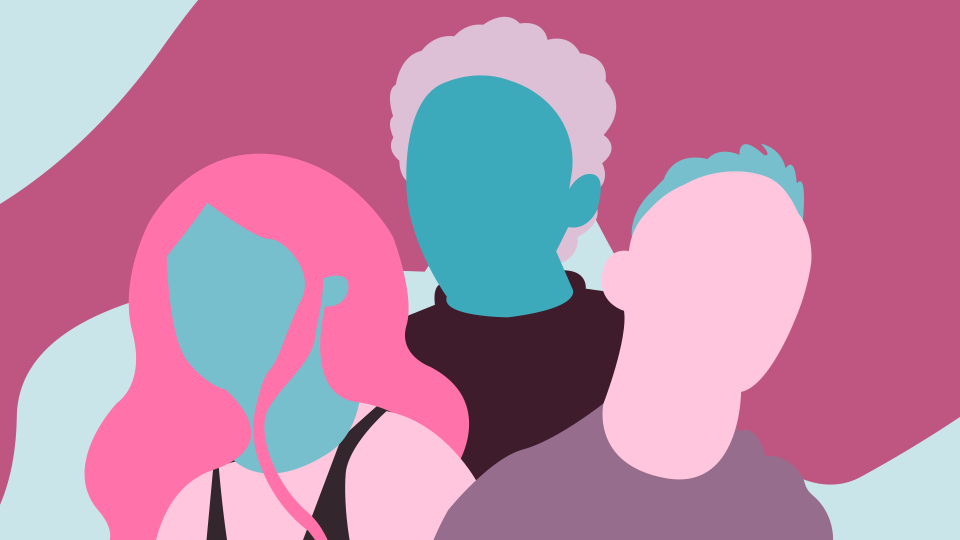 A key part of any transgender person's identity is their name. It's a self-chosen representation of who they are and how they identify, and a symbolic marker separating themselves from their past.

While many transgender people will transition from male to female (MTF), or from female to male (FTM), they can also identify outside of the gender binary. Nonbinary people do just that by using gender-neutral pronouns such as they/them/theirs and presenting in a way that is not exclusively masculine or feminine.

Every transgender person — like anyone else — has a story behind their name. For them, though, the story is something they were directly involved in. Their names can come from anywhere: people they know, books they’ve read, or even something heard in passing.

No matter where the name is from, though, they chose it for a reason. Here are a few:

Senior Nik Sawade has openly identified as nonbinary since their first year at Miami. Before they started going by Nik, it was a pseudonym they used online to hide their identity.

"I had this idea of 'stranger danger' pounded into my head by my parents and was told not to put a bunch of information about yourself online when you're young, stuff like that,” Sawade said. “And so I thought, 'well, hey, if I use a different name and different pronouns online, that makes me safe.' And it kept going from there."

Originally, they went by Niki online, a shortened version of their middle name. After going by Niki around their online friends, Sawade said the name began feeling more natural.

"One day, sometime in 2018 or 2019, one of my really good friends ended up calling me Nik as a nickname and it felt right," Sawade said.

"When I read it, in reference to me, it felt like that was supposed to be my name. It just resonated with me at a different level."

In their first year at Miami, Sawade lived in the Love, Honor, Pride Living Learning Community (LLC). This allowed them to meet other LGBTQ+ students and embrace their own identity, something they had trouble doing before college.

"It helped me solidify myself in my identity," Sawade said. "I know it has affected me a little bit, not in the sense that I've changed how I look at my identity but more so I've affirmed myself in my identity. It's given me perspective of things, understanding how other people view their gender identities and their sexuality, stuff like that."

Sawade attended a small, private Catholic school until high school, where they transferred to a larger public school. Going from having around 200 classmates to over 2,500, Sawade said they were able to explore their identity more openly.

"I went from a small religious school to a big public school, and in that public school there were a lot of LGBTQ+ kids," Sawade said. "That was when I was starting to figure stuff out. I only came out about my sexuality in high school, never my gender identity because I saw how they treated trans kids. A lot of them liked to talk behind their back and stuff like that."

Moving from high school to college, Sawade was able to be fully open with their identity. Not everyone understood being nonbinary, they said, but the people they associated with were accepting.

"There were some teachers that were really good about it and would correct other people as well, and also would make sure to use the correct pronouns for me 100% of the time and would correct themselves if they messed up. Those were always teachers that were also LGBT, there's a few of them in my department and I tend to gravitate towards them and towards their classes."

"It has definitely helped a lot to have a community of people who understand or, at the very least, feel like 'yeah, you are a human being and you deserve basic respect,'" Sawade said.

Miami alumna Lily Bertrand first realized she was transgender near the end of her senior year, right as the COVID-19 pandemic began. Since then, she has graduated from Miami and now lives in Boystown, a predominantly-LGBTQ+ area in Chicago. When she started questioning her gender identity, Bertrand said she looked around and went on baby name websites to find a name she liked.

"When I had it down to a list of ten names, I would play through Pokemon Fire Red with that name as my character," Bertrand said. "Eventually I just was like, 'well, I like this one best, and it's not gonna suit me to just sit here and do nothing, so let's go with it.' And I chose Lily."

For Betrand, realizing her identity was a mix of self-reflection and external validation. One of the key components in her realization was taking Gender and Sexuality in the Media with Dr. Bruce Drushel.

“We watched a movie called ‘Boys Don't Cry’ with Hilary Swank," Bertrand said. "It's about a trans man and his experience. That movie was so, so powerful to me, and I didn't know why. But that class was huge for me … Seeing people [talk] about [being trans] candidly, as opposed to something that was pretty extreme at the time and was, to me, a very niche and kind of outer-circle thing, that brought it to my attention that it was really something to even think about it all.”

Along with this, Bertrand found posts online she related to. Specifically, she said, posts on the subreddit r/egg_irl helped her realize her gender identity.

“I'd still done almost no questioning of my gender," Bertrand said. "I felt weird, but I didn't know why.”

Until, one day, she came across a subreddit on Reddit where people who were transgender, but were refusing to admit it, were posting.

“And it was just an endless stream of, ‘I really relate to that,’ and ‘That's really interesting that these things I feel are being felt by people who identify as trans.’ That's where my crisis truly took root.”

Looking back, Bertrand said, many of these things were even clear in her childhood, before she even knew what being transgender was.

“Something that all trans people have is a story of, ‘oh my God, how did I not realize I was trans earlier?’ And my story is, in my eighth grade year on Halloween, I dressed up as a girl and I loved every second of it,” Bertrand said.

“And I was devastated when I wasn't allowed to dress up as a girl for Halloween the next year. So much so that I put a post on Natasha's page saying that she would never return, which was incredibly dramatic. But, oh my God, how did I not realize I was trans earlier?”

While dressed up as Natasha, Bertrand had borrowed her sister's clothes. She said the two of them were able to laugh while looking back on it, sharing the “oh my God” moment. Since then, Bertrand said her sister, who is lesbian, was supportive and helpful in her transition.

“She was a great resource because she had already gone through the process of discovering something, coming out, and dealing with that,” Bertrand said. “So that was really wonderful. And I also had some, you know, great friends who – despite the fact that they hadn't had experiences with the trans identity – were accepting and did their best to kind of help me through that process.”

Having recently come out and started transitioning, Bertrand said she still encounters her deadname regularly – something that, to her, is awkward and inconvenient.

“It would be like if instead of showing your ID, you had to show them a C minus that you got in a class,” Bertrand said.

“It's like, ‘I don't really want you to see this, but it's not the end of the world. It's just mildly embarrassing, mostly inconvenient. And I pray to God that you don't ask any questions about it.’”

For Bertrand, transitioning was a process involving large changes. She changed her hair, clothes, and many parts of her identity. And she often had to navigate these changes on her own.

“It's an outwardly destructive process, kind of like dissolving in a cocoon to become a butterfly,” Bertrand said. “But you're dissolving in you, the cocoon isn't really there. You just have to become goo and then build yourself back up.”

“I wanted to go by a different name when I got to college, because when I was a kid my dad told me a story about how one of his friends did that and I was like, ‘that's cool, I can have a whole new name!’” Mesnick said. “I didn't realize how hard it would be.”

Theo was originally a name they saw in a book, where it was short for Theodore. While reading Donna Tartt's “The Goldfinch,” Mesnick said the name just stood out to them. Despite this, Mesnick said, they didn't have much in common with the Theodore from the novel.

“God, no, I'm so glad I don't relate to that character,” Mesnick said. “He's kind of a messed-up person. I just liked the name.”

Going by Theo, Mesnick said it was hard to adapt to hearing the name after almost two decades of going by something else.

“I didn't know to respond to Theo at first, which is kind of funny to think about now after four years,” Theo said. “I remember one time I still had my deadname on my Snapchat, which I've since changed, but people knew my deadname more and this girl from my dorm was calling out to me, saying ‘Theo!’ And I wasn't responding, so she shouted out my deadname and I was like ‘oh, yeah?’”

Even though they go by Theo at Miami, Mesnick said their family still uses their deadname. While this doesn't bother Mesnick, they said it creates a clear distinction between the two “modes” they have at school and at home.

“My family still calls me that name, and they've asked me if I want them to call me Theo, and I tell them no,” Mesnick said. “I feel like it would be weird because they've called me my deadname my entire life … Deadnames are called deadnames because they're supposed to die when you start your transition, but mine is still very much present in my life.”

Majoring in creative writing and political science, Mesnick has focused on writing poetry in many of their classes. Having had multiple professors who were either accepting or LGBTQ+ themselves, Mesnick said they are comfortable writing about their identity – and anything else – openly.

Mesnick's writing often takes different forms. While it can focus on their identity, they said, more often than not it's about another part of their life.

“Essentially poetry is just doing what you want with words, and what different people want is going to vary,” Mesnick said. “Today I saw a slug, and I wrote about slugs. Well, I haven't written it down yet, it's in my head.”

“Being queer is a really important part of my identity and experience,” Mesnick said. “But it's certainly not all of it.”

The Matter of Life and Death