I Didn't Find the Frogman 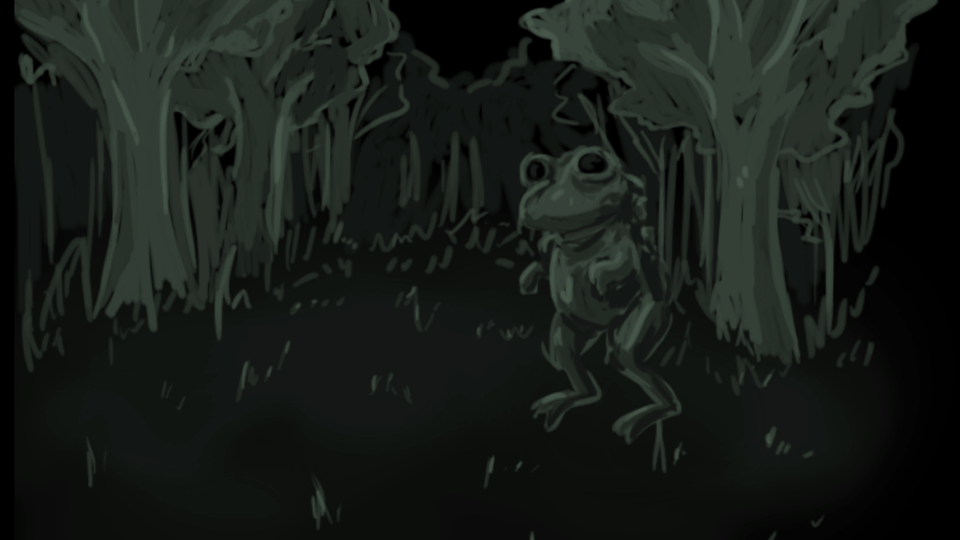 Over the past week, I'd been reading stories online about a local creature: The Loveland Frogman. Supposedly, it is a 4-foot-tall, frog-like creature that roams the small town of Loveland, Ohio, occasionally spotted throughout the last 50 years.

My first "encounter" with the Frogman was about a year ago, when my friend Vince and I were walking along the Loveland bike trail in the dead of night. As we neared his car, he stopped to use the public restroom by the parking lot. I waited outside. After a few minutes, he came sprinting out.

“The Frogman, obviously,” he said.

We laughed it off and drove home.

Now, it's the first weekend of October, and I'm walking along the bike path in search of the Frogman. Almost a full moon, but not quite. A dense cloud cover turns the sky black and diffuses what little light there is. A sepia-tinted grayscale washes over the ground.

As I come to a bridge, I make my way down a small dirt path beside it that leads to the river beneath. Walking along it, the darkness blurs the line between land and water. The freshly-barren trees feel like long, dry fingers reaching up from the ground to snag on my jacket and get caught in my hair.

I take unfocused pictures of the trees, sending bright flashes of light across the water, revealing it for a fraction of a second. Every time the flash fades, the river slowly creeps back into the land.

Atop the bridge, the lights of bikers — out far too late — shine through the wooden planks but never stay for more than a split second.

The sirens of emergency vehicles begin to echo above the trees toward a car accident, and it seems as if the finger-like branches reach out to muffle them.

With nothing but a few blurry pictures, I work my way back up the dirt path and onto the bike trail.

As I follow it, another spot — this one more out of the way — creeps into the back of my mind, practically possessing me to approach it. About 50 feet off the trail, I find the right break in the trees.

Leaves crush beneath each step I take, announcing the weight of my steps to the surrounding trees. But my feet are the only ones making any noise, and I doubt the trees are listening.

Between each step, dead silence.

Making my way down the path, the crackling of leaves follows my every move. As I reach the clearing, spotted by broken chunks of concrete and filled with the soft murmur of the river, I stop to listen for the croaking of a frog.

As I look around, I see a figure barely perceptible and completely unmoving in the vague grays of the night.

I call out to it, but it refuses to move.

I call out again, and it lumbers toward me, its footsteps silent on the broken concrete and dead leaves.

I feel the dryness of my mouth. As the figure approaches, it looks to be a man, about six feet tall, with a gray beard on his jaw and a tattered flannel on his shoulders. He stops about three feet from my face and extends his hand to me. I would rather do anything than shake it.

His face is obscured, but I can see his mouth beginning to move. He asks who I am, and I tell him my name.

It felt like an accusation, in some way. But yes, I am sure.

He asks for some form of I.D., apparently doubting that I have any right to be there. I try to explain why I'm there — that it's nothing malicious — but an exhausted sputtering of words is all that comes out. After a few incoherent seconds, I manage something of a question:

"Am I on private property or anything?"

As I ask this, his back straightens. His body looks disturbed as it unfurls. His mouth twists a small bit before returning to its initial scowl.

Seemingly pulled away by some greater force, maybe by the same trees that picked at me and clawed at the sky, he turns and walks into the trees, his footsteps dead silent.

I call after him, hoping to avoid some undeclared judgement.

"Sorry to disturb you," I say.

"There were no disturbances at all," he mutters cryptically.

As I walked back, my footsteps were loud as drums against the concrete and leaves. The only footprints along the path were the ones I had left earlier. The only thing my flashlight caught was the dry branches of trees.

Needless to say, I didn't find the Frogman.