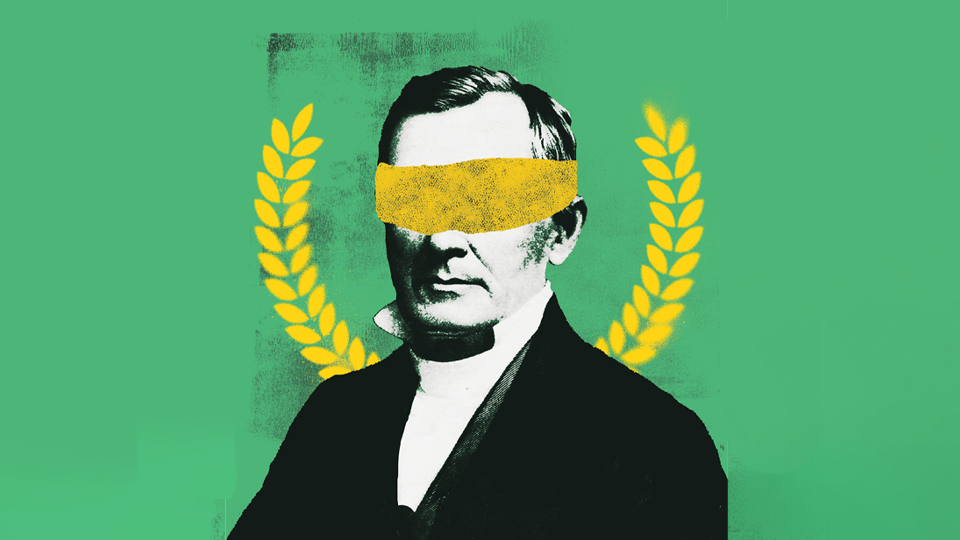 On March 25, 2019, The Miami Student broke a story that would forever change Greek life at Miami University.

A Delta Tau Delta (Delts) pledge, later identified as Tyler Perino, had filed an anonymous report saying he’d been paddled in the buttocks to the point of bleeding internally while being forced to drink alcohol and smoke weed as part of a hazing ritual.

The headline of the article, 'Call 9-1-1, I feel like I'm going to die,' is taken from a conversation between Perino and his girlfriend following the incident.

Despite the brutality of the assault Perino faced, none of the 18 Delts charged with hazing served jail time, and most only paid fines of $100 to $250.

Though the individual members were let off the hook, the chapter itself was not. Delts cannot return to Miami’s campus until at least 2034.

Perino’s story was one of the most recent blows to Greek life’s reputation at Miami, but it was far from the first time Greek organizations stirred up controversy on campus.

Back in the mid-19th century, fraternities were nowhere near as ubiquitous as they are today, so many university officials were suspicious when they began popping up on Miami’s campus.

The president of Miami at the time, Robert Hamilton Bishop, was an exception to this mindset. He welcomed fraternities with open arms and played a major role in bringing Alpha Delt and Beta to campus during his presidency.

This proved to be a fatal flaw for Bishop, though, as Miami’s Board of Trustees dismissed him from his position in 1840, largely due to his pro-fraternity stance.

Bishop’s successor was George Junkin who hated fraternities almost as much as he loved slavery. Junkin spent the entirety of his term as president trying to pass an “anti-secret society” resolution in the Board of Trustees which would ban fraternities on campus.

Before he could pass this resolution, though, Junkin was dismissed from his position and replaced with Erasmus MacMaster, who was not as authoritative as Junkin but still anti-fraternity.

As an act of defiance against the hostility toward fraternities that had persisted on campus for years, all the members of Alpha Delt and Beta played a chilling prank against MacMaster in 1848.

The men blocked the door to Old Main – the administrative building that housed MacMaster’s office – with a massive snowball. When the snowball was later destroyed, they packed Old Main’s entire first floor with snow.

The incident, which became known as the “Snowball Rebellion,” enraged MacMaster. He immediately expelled every fraternity man on campus, which dropped Miami’s student population from more than 200 to less than 70.

Unfortunately for MacMaster, though, he was fired for expelling so many students and replaced by William C. Anderson, who was more pro-fraternity.

More than 150 years after the Snowball Rebellion, it’s clear who was victorious in the power struggle between fraternities and administration. Unlike Bishop and Anderson, both Junkin and MacMaster have no buildings named after them.

In 2010, Miami’s Greek organizations made national headlines on two separate occasions, and not in a good way.

Miami’s chapter of Pi Beta Phi (Pi Phi) – a fraternity for women – was founded in 1945. After repeatedly violating both fraternity and university regulations, the chapter was closed in 2017 by Pi Phi’s national organization.

Before the chapter was gone for good, though, it received a year-long suspension for its actions at one of its formals in 2010.

On April 9, Pi Phi held its spring formal at Lake Lyndsay Lodge, a reception venue in Hamilton. By the end of the debacle, Miami’s Greek organizations were banned from holding events at Lake Lyndsay ever again.

A letter written from Lyndsay Rapier-Phipps, operator of the lodge, to Miami’s dean of students detailed the wild night.

The students began drinking for the formal while on the bus and were visibly intoxicated by the time they arrived at the lodge at about 8 p.m. Phipps’s letter notes that many could barely walk through the doors to the facility.

A staff member at Lake Lyndsay named Yvonne had the unfortunate task of supervising the attendees, and, as evidenced by the letter, was repeatedly disrespected by the students.

Shortly after the students arrived, Courtney, Pi Phi’s president, boldly told Yvonne to “stay in the office and leave [us] alone.” Another girl got testy with Yvonne when she tried to stop her from using a restroom stall with an out-of-order sign on the door.

“Excuse me,” Yvonne said to the girl, “but this stall is out of order. That is why it says, ‘out of order.’”

“You don’t understand,” the girl replied. “I don’t care.”

The students continued drinking and getting more and more intoxicated – to the point where many were vomiting throughout the lodge – so the caterer decided to close the bar. Several male attendees responded by climbing over the bar and attempting to get the alcohol from behind the caterer.

The lodge was completely trashed by the end of the night, and it was hosting a wedding at 8 a.m. the next day. The staff was up all night cleaning up after the Pi Phis and their guests.

Though the AXD incident was similar in nature to the Pi Phi one, it was perhaps even more egregious because of its location – the National Underground Railroad Freedom Center in Cincinnati.

The Freedom Center houses numerous slavery-era exhibits and artifacts, but on March 26, 2010, AXD members turned it into their own personal playground. Event Coordinator Rhonda Miller, like Phipps, wrote a letter detailing the night.

When the students arrived at the center, a few were already intoxicated, and one girl threw up almost immediately after getting off the bus. Miller and other employees refused to let any drunk students into the building, so they called a taxi for the girl who vomited, her date and another couple.

The girl’s date soon realized he would be responsible for paying the cab fare, and he refused to get in the taxi and became physically aggressive toward the Freedom Center staff.

“I’m gonna fuck you up!” the man yelled at Miller. Security forced him into the cab, and the students were sent back to Oxford.

Shortly after dinner, another girl threw up. It was then that Miller and her staff realized many of the attendees had smuggled alcohol into the center in plastic bottles or flasks. They then proceeded to confiscate more than 50 bottles and continued to find more as they cleaned up the next day.

Throughout the night, several more female guests threw up in the bathrooms, often missing the toilets. Their dates urinated on the bathroom walls.

One male guest, though, tried to relieve himself somewhere else: on an exhibit featuring a slave quarters.

Miller found the man standing on the corner of the exhibit, seconds away from urinating on it. Fortunately, though, she stopped him in time. The same student was later caught by another staff member trying to urinate in the catering elevator.

The Freedom Center staff reportedly spent a full 24 hours cleaning up after AXD and their guests, and, understandably, they banned AXD from ever holding future events at the center.

In response to the incident, Miami suspended the chapter for two years, but it was not recolonized until 2018, long after everyone involved had graduated. Though AXD was eligible to return to campus in 2012, there was no attempt to re-establish the chapter that year.

In 1848, more than 100 fraternity brothers were expelled from Miami for rolling a giant snowball in front of the door to a building.

In 2010, a couple hundred sorority sisters who completely trashed two different venues lost their letters for a couple years and didn’t face any other serious punishment.

In 2019, more than a dozen fraternity brothers who beat a pledge to the point that he thought he might die evaded prison time and were not even expelled from Miami.

While there have been several high-profile incidents in the history of Miami’s Greek life, they are certainly far from equal.

Back in the university’s earliest days, pranks such as the Snowball Rebellion were the peak of Greek debauchery. Today, cases of brutal, dangerous hazing are all too common, and the drunken vandalism of 2010 seems tame by comparison.

During the years in between, though? Your guess is as good as mine. I tried to find other highly-publicized cases of Greek controversy in the many years between 1848 and 2010 but came up empty.

That’s not to say incidents like the ones we saw in 2010 didn’t happen. It’s just that the Internet and social media didn’t exist for most of those years, so there wasn’t as large of a platform to publicize them.

Regardless of what happened between the mid-19th century and today, it’s clear that the issues of hazing and the shenanigans associated with binge drinking have become more and more serious with each passing year. Universities try to fight back with suspensions and fines, but substantial changes rarely occur.

According to my research, Miami has never had a student die as a result of hazing, but other institutions have not been nearly as lucky. 2020 was the first year since 1970 in which there were zero hazing deaths in the United States.

Most colleges were shut down for the majority of 2020, though, so that is a likely explanation for the lack of hazing activity last year.

The trend of yearly hazing deaths has already picked back up in 2021, too – in early March, Stone Foltz, a sophomore at Bowling Green State University, died after drinking at a Pi Kappa Alpha fraternity event.

Ohio is currently considering making hazing a felony, which is a great step toward deterring Greek organizations from continuing these toxic practices in the future. Whether it will be enough to make them let go of their sacred traditions remains to be seen.

Though Greek organizations also undoubtedly benefit the Miami community by providing their members with lifelong friendships and opportunities to perform philanthropy, those few negative, high-profile incidents overshadow the good they do.

In the wake of the Delts incident that still lingers in current students’ memories, the Greek community has the opportunity to learn from its troubled past and avoid repeating its mistakes in the future.

Whether it’ll take that opportunity, though, remains to be seen.