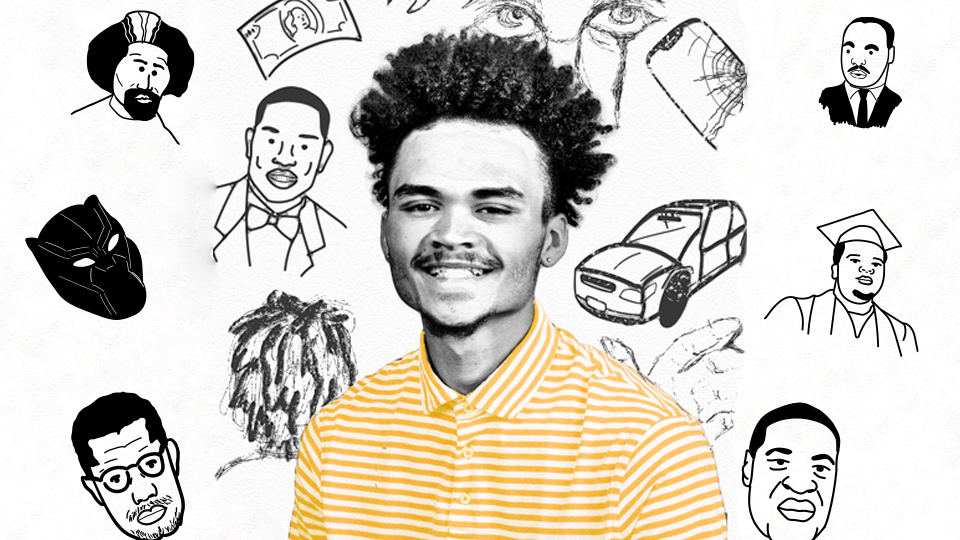 That being said, I want to mention Black joy, which is the idea that Black accomplishments and Blackness itself should be celebrated to counter the countless trauma narratives that are basically inescapable in the media.

My frustration is evident, but that does not stop me from celebrating who I am. Black is beautiful. Thank you.

What does it really mean to waste time?

I’m 20 years old. I quit my job after a stroke of bad luck. My phone stopped working. I lost my wallet, and my car broke down all in about three days. I emptied my bank account to fix my car.  Now, I’m broke, jobless and technically wasting time.

I’ve beaten about four video games, watched half of  “Surviving R. Kelly” and slept past noon at least 30 times. I don’t have money to spend anymore.

I have officially been a dishwasher, cook, pizza host extraordinaire, playground policeman and now a dog walker.

My resume is elite.

In a year and a half, I’ll ideally be teaching if the pandemic ends and I can find a job. The unique skill set of being a male person of color in a white, middle-class, female-dominated field will hopefully give me more advantages than disadvantages.

Then again, I never had many teachers who looked like me growing up. I didn’t have a Black teacher in my life until I got to college.

That’s kind of incorrect to say.

When you’re Black, part Black, Blackish, half-Black, whatever you want to call it, and you grow up in the Midwest, you form your own Black experience.

I remember when I was really young, third grade maybe, I had to make a shield with a famous historical figure. I really don’t know whether I was assigned Frederick Douglass or if I picked him. I learned about abolitionists and the Underground Railroad early in my educational life.

I think that helped shape me.

In Douglass’ autobiography, which I’ve only read when I was forced to for class (I won’t cap), he talks about how becoming literate caused him pain. The story goes that he exchanged scraps of food with white kids who taught him how to read in return. He talked about how learning about the world around him and the atrocities committed against his people caused him unimaginable pain.

The first thing I associated Blackness with was pain.

I was young and unaware. I even used to say that my much lighter palms were my white half and the backs of my hands were my Black half. But I knew Black people were slaves. I knew they worked for free and were taken from their homes and whipped. That’s what I saw and heard from my teachers.

The second thing I associated Blackness with was entertainment. Black people tell their horror stories, whether it’s current or a snapshot of the past, and make money from it.

If you are from the real trenches and you can record music, you will have an easier time coming up as a rapper than a suburban kid because your stories are valid.

We as a society do not commit crime or go to jail or have threesomes on the weekly, so we establish what is valid. That’s crazy. Then, Black people go to white people with money and power to distribute that Black trauma for a profit. But rich white people give just enough back to the Black creators to make them think they made it. That’s crazy.

It’s either “Roots,” or “Black Panther!” It’s either “Wakanda” or “The Plantation!” Think about that.

I told my wonderful, charismatic, asshole of a teacher Mr. Claus in a film studies class my senior year of high school that “Black Panther” would be the biggest movie of the year. He asked me why I thought that, as good teachers do, and I explained to him that you have to think of the audience. Black people would go out in record numbers.

Later, in college, I realized that Black people flocked to the theaters for “Black Panther” to see themselves outside of trauma narratives. As of May 2018, “Black Panther” had made over a billion dollars. That’s crazy.

Circling back even closer to home, Black kids form their own identity in the Midwest, especially half-Black kids with absent Black dads and white moms.

Consider this. You grow up around mostly white people. You know you’re Black – Black enough to feel different from all the white kids.

But nobody is around to teach you how to be Black.

So you teach yourself.

You make that shield in elementary school with Frederick Douglass on it. Then, you hear about people like Dr. Martin Luther King Jr. Every Black kid in middle school with any interest in history loves MLK for at least a couple years.

Then, you combine all this with TV shows and movies about the Black experience, and, most importantly (for me anyway), Black music. Now, you have created a Black narrative, i.e. How To Be Black.

Then, you get older and your friends are smoking and drinking and trying to live a normal life. But you suck at it. You’re not social. Maybe friendly or well known, but you just don’t want to get drunk with people you aren’t that close with so you can do dumb stuff and tell stories about it. That’s not for me.

So you spend more time alone, and you fill that alone time. You learn more, listen more, watch more, and you come to the conclusion that they only showed you half the Black experience in school and mainstream media.

‘Cause weren’t Black people just slaves who were “freed” that then turned into people who were discriminated against in the ‘60s, and MLK died, and now we all get along? ‘Cause that’s what I was taught.

And then you learn about the prison system and how it’s basically just a loophole to slavery. And, wait, the police are just an updated system hiding in plain sight that reinforces racism?

Wait, why isn’t anybody going to jail?

That’s crazy. Wait, it started happening again? You’re telling me they chased Ahmaud Arbery down and killed him? Damn. I didn’t even have time to process that. Wait, who is George Floyd? Damn. He got killed, too?

As I’m writing this, the U.S. Capitol building is being overrun by Trump supporters who, I guess, are ready to kill the “lizard people” controlling the government.

I’m thinking about Ferguson and the picture of the dude throwing tear gas back at police officers when they rioted because Mike Brown was killed in broad daylight. They stormed the Capitol Building. They took pictures with the police. That’s crazy.

So, think about this. You’re half-Black, well educated (by yourself and by your schooling), curious and impressionable. What does the Black experience really look like?